This New Year’s Day 2018, California State Parks will participate in the 7th Annual First Day Hikes at parks across the state. This national-led effort encourages people to experience the beautiful natural and cultural resources found in the outdoors with a seasoned guide so that they may be inspired to take advantage of these treasures throughout the year.

Dedicated docents, volunteers and staff will show visitors the wonders of California’s state parks. Distance and rigor will vary per hike/activity, so visitors are encouraged to check out details of start times and description of hikes. For a complete list and detailed information on the California State Park’s First Day Hikes, please visit the First Day Hikes webpage.

Hikes in Marin include Mt. Tam and Angel Island.

Every decade or so, Robert likes to check in with the Monty Hall problem. You may have heard of it. If not, you can read all about it here at wikipedia.

The Monty Hall problem is a brain teaser, in the form of a probability puzzle, loosely based on the American television game show Let’s Make a Deal and named after its original host, Monty Hall. The problem was originally posed (and solved) in a letter by Steve Selvin to the American Statistician in 1975 (Selvin 1975a), (Selvin 1975b). It became famous as a question from a reader’s letter quoted in Marilyn vos Savant‘s “Ask Marilyn” column in Parade magazine in 1990 (vos Savant 1990a):

Vos Savant’s response was that the contestant should switch to the other door (vos Savant 1990a). Under the standard assumptions, contestants who switch have a 2/3 chance of winning the car, while contestants who stick to their initial choice have only a 1/3 chance.

Many readers of vos Savant’s column refused to believe switching is beneficial despite her explanation. After the problem appeared in Parade, approximately 10,000 readers, including nearly 1,000 with PhDs, wrote to the magazine, most of them claiming vos Savant was wrong (Tierney 1991). Even when given explanations, simulations, and formal mathematical proofs, many people still do not accept that switching is the best strategy (vos Savant 1991a). The problem is a paradox of the veridical type, because the correct choice (that one should switch doors) is so counterintuitive it can seem absurd, but is nevertheless demonstrably true.

Robert likes to revisit the  problem from time to time in order to refresh his very thin grasp on Baysian probability. Each time he looks at the problem, he satisfies himself that he understands the solution.  But then, of course, he soon needs to figure it all out again.

Actually, Robert will say that of all the explanations of the problem, these images from Wikipedia are the best for him. 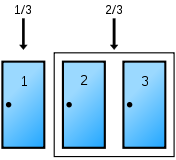 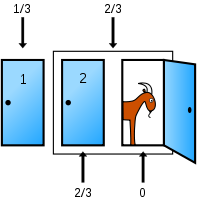 What is so absolutely awesome, Robert has come to learn, is that the vos Savant episode, which introduced the problem to a mass audience, occurred at the exact time that the field of behavioral psychology was coming into swing. You know, of course, that there have been a few recent Nobel Prize winners in that field.   The problem demonstrates exactly the kind of thing that behavioral psychologists like Daniel Kahnaman, et. al have been telling us for about twenty years.  That humans really suck at statistics. Especially, for example, Baysian probability.

So, it turns out that over the last ten years there have been some really neat papers trying to explain why we suck at the Monty Hall problem (since renamed by academics as the Monty Hall Dilemma (MHD)) and what we might do to get better at it.

For your nighttime reading pleasure:

Testing the limits of optimality: the effect of base rates in the Monty Hall dilemma, Herbranson and Wang, 2013 read.

Robert is reading some of the papers in debate of the US Constitution, something he has not done since college, and, err, not well even then.

The first paper in the book he is reading is Benjamin Franklin’s Speech at the Conclusion of the Constitutional Convention, which, as the title suggests, are the comments that Ben Franklin gave in September 1987 at the closing of the convention where the first version of the Constitution was issued to the people for discussion and approval or rejection. Franklin was a little over 80 years old and, as we all know, an accomplished person of many attributes.

The main idea of Franklin’s speech is summed up in its first sentence.

“I confess that I do not entirely approve of this Constitution at present, but Sir, I am not sure I shall never approve it.”

It is not clear whether Franklin was trying to be humorous.  But his point, it seems, was that the draft constitution was imperfect. He signed it because he trusted the men who put it together and he  heard no better alternatives during the convention.

Franklin’s speech did not give the draft high praise, that’s for sure. And the point was not lost on the first few antifederalist commentators who published statements on the draft Constitution in the newspapers.

“Z,” a writer of an essay in the Independent Chronicle of Boston in December 1787 should have titled his remarks “WTF.”  Z asks what federalist in his right mind would try to support the notion of a national government using the argument that Franklin, a great philosopher, did not entirely approve of the Constitution at the very moment he signed it? According to Z, that Franklin may, at one time or another, approve of the Constitution, gave the federalists faint support. And this was only so far as the federalists could rely on Franklin’s judgment at all.

The notion that Franklin was operating with a few loose marbles by the time of the conclusion of the constitutional convention appears to have been a favorite one of the antifederalists.

So Robert gets to play Andre all day.

Dare to discover Forbidden Island! Join a team of fearless adventurers on a do-or-die mission to capture four sacred treasures from the ruins of this perilous paradise. Your team will have to work together and make some pulse-pounding maneuvers, as the island will sink beneath every step! Race to collect the treasures and make a triumphant escape before you are swallowed into the watery abyss! 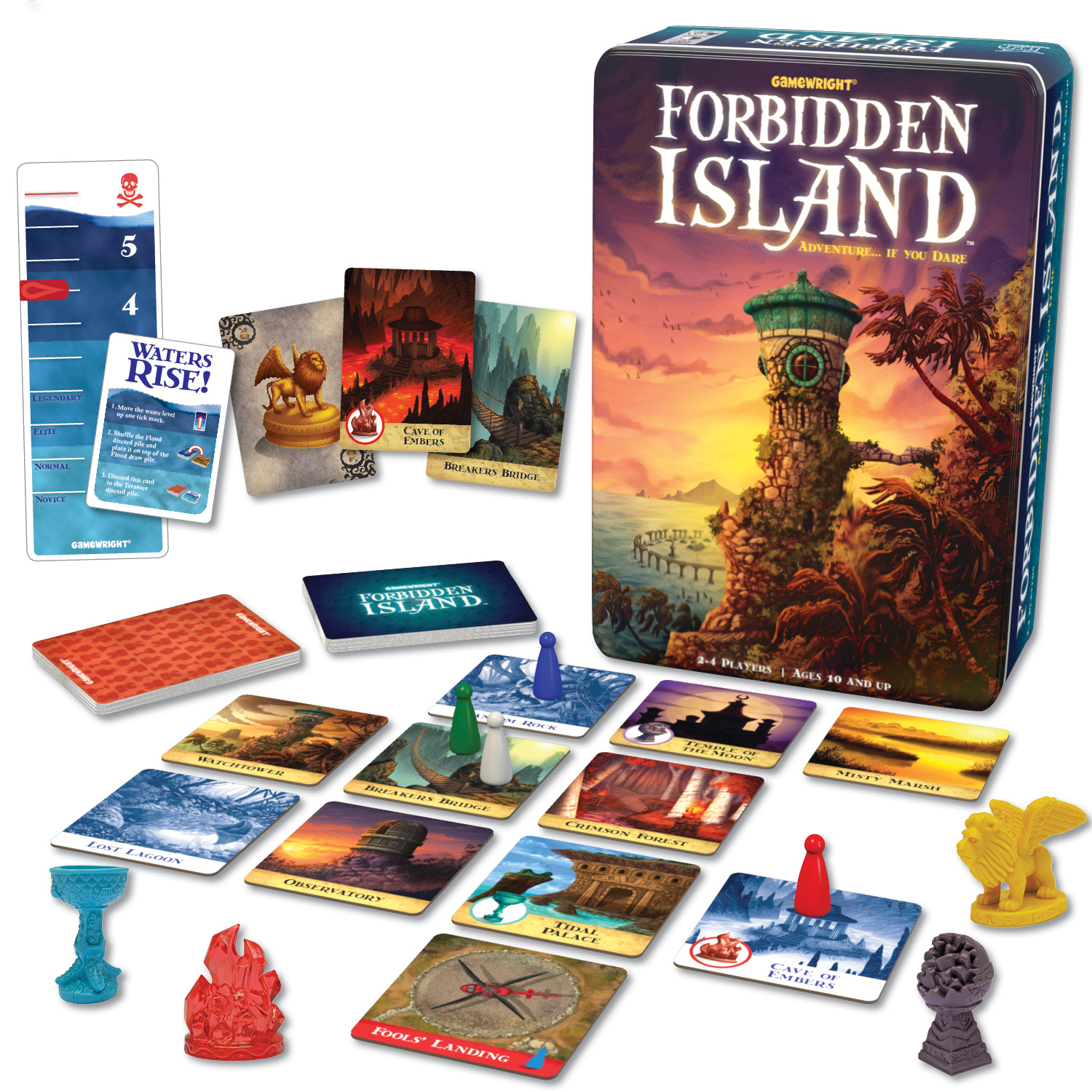 It’s a great honor to introduce the latest creation by cooperative game master, Matt Leacock. There are so many things we love about this unique game: from the rich illustrations, to the collaborative nature of play, to the innovative set of rules, to the infinite possibilities generated by the tiles and cards. Don’t be surprised if your pulse starts pounding faster soon after you start playing – it’s a game that instantly generates an electrifying atmosphere of tension and excitement!

“Our current corporate tax system is outdated, unfair and inefficient. It provides tax breaks for moving jobs and profits overseas and hits companies that choose to stay in America with one of the highest tax rates in the world. It is unnecessarily complicated and forces America’s small businesses to spend countless hours and dollars filing their taxes. It’s not right and it needs to change.”

Law firms and other professional service entities won’t be entirely excluded from tax relief for pass-through entities in the final version of the tax bill that is awaiting passage.

The House version of the bill would have excluded law firms and all other professional service business from pass-through tax relief, and it would have lowered the maximum tax rate rather than provide for a deduction.

Pass-through businesses include partnerships, Subchapter S corporations and sole proprietorships. Income for such entities pass through to the owners’ individual returns, where it is currently taxed at ordinary income tax rates.

Under the consensus bill, owners of pass-through businesses can take a 20 percent deduction for qualified business income they receive from the entity, according to the Washington Post, the conference report (PDF) and the conference committee’s joint explanatory statement (PDF, see pages 20-40). Qualified business income is nonwage income that is calculated according to a formula. The deduction in the original Senate bill was 23 percent.

The tax deduction is phased out for owners of professional services businesses whose taxable income exceeds $315,000 for married individuals filing jointly or $157,500 for individuals. The threshold in the consensus bill is lower than the thresholds of $500,000 and $250,000 that were in the original Senate bill.

The Pierces were finally able to attend a holiday party at the magnificent home of Jerry Peters in Lucas Valley.  That is, overlooking Lucas Valley.  The kids baked cookies and played ping pong. Robert enjoyed the superb bar.