Robert wants to say that he was wrong.  Yesterday, in the type of conversation about nothing that he often has with his wife, he mistakenly told Mira that the actor that played “Doc” on the Loveboat is the same actor that played Colonel Klink on Hogan’s heroes.   This was not true.  In fact,

Robert is hoping to plow through some of his copy of the Library of America collection of Willa Cather’s early novels and stories.  He just read t Paul’s Case, first published in 1905 in Troll Garden, a collection of short stories.

Paul is a schoolboy in Pittsburgh who  is not getting along with his teachers at school.  He treats his school elders with a contemptuous and irritated physical aversion.  A sneering smartness.  A disgust. Cather develops the character by showing us that he has a second life, outside of school and away from his just-middle-class family on Cordelia Street. Paul swirls in the world of entertainments.  Both as an usher at Carnegie Hall, where he spends his night seating the city’s industrial magnates and saturating himself in the symphony, and as as a loiterer among the dressing rooms of the city’s theater houses.  “It was at the theater and at Carnegie Hall that Paul really lived; the rest was but a sleep and a forgetting.” Indeed, “after a night behind the scenes, Paul found the school-room more than ever repulsive.” The people there, trivial. 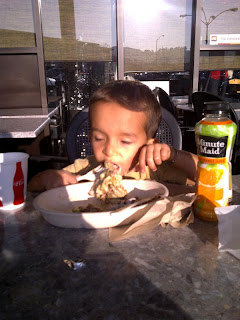 Nothing better than tennis and burritos with dad.

Nothing better than tennis and burritos with dad.

Robert and Mira took a tour of St Mark’s School today.  No comments other than to say that thinking about schools makes Robert’s head hurt.  He is starting to have the feeling that there is no point in thinking about it too hard.